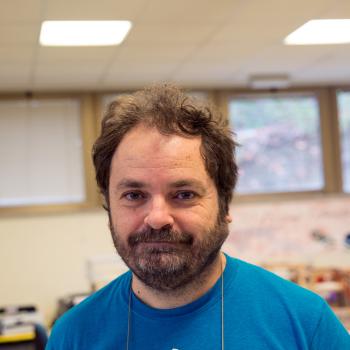 He works as technician for the Science, Technology and Innovation Unit (STI). He started his collaboration with ICTP in 1995 for a series of projects of technical training in the field of low-cost long-distance radio communications (later become wireless networking). Since 2010 his interests and responsibilities have broaden to include computer programming, FabLab-related technologies (digital fabrication, 3D printing, laser cutting, 3D modelling, etc.), web and multimedia technologies for science and education, the use of tablets and smartphones for research and STEAM education. Currently he manages the ICTP Scientific FabLab and co-organizes the Maker Faire Trieste (since 2014).

In 1987 started a degree course in theoretical physics at the University of Trieste, but never completed.

Manager of the ICTP Scientific FabLab, position of technical assistant P1(PA) for the Science, Technology and Innovation Unit (STI) of the International Centre for Theoretical Physics (ICTP) in Trieste, Italy.

Previous activities with the International Centre for Theoretical Physics (ICTP):

- Scientific Consultant (SSA) for the ICTP Networking Programme: from April 1995 to end of 1997.

- Scientific Consultant (SSA) for the ICTP Aeronomy and RadioPropagation Laboratory (ARPL) from 1998 to 2001.

- Scientific Consultant (SSA) for the ICTP ARPL and the ICTP Donation Programme from 2002 to 2005.

- Scientific Consultant (SSA) for the ICTP Science Dissemination Unit (SDU) and the ICTP ARPL from 2005 to 2012.

- Technical assistant P1(PA) within the ICTP STI from 2022 (current position).