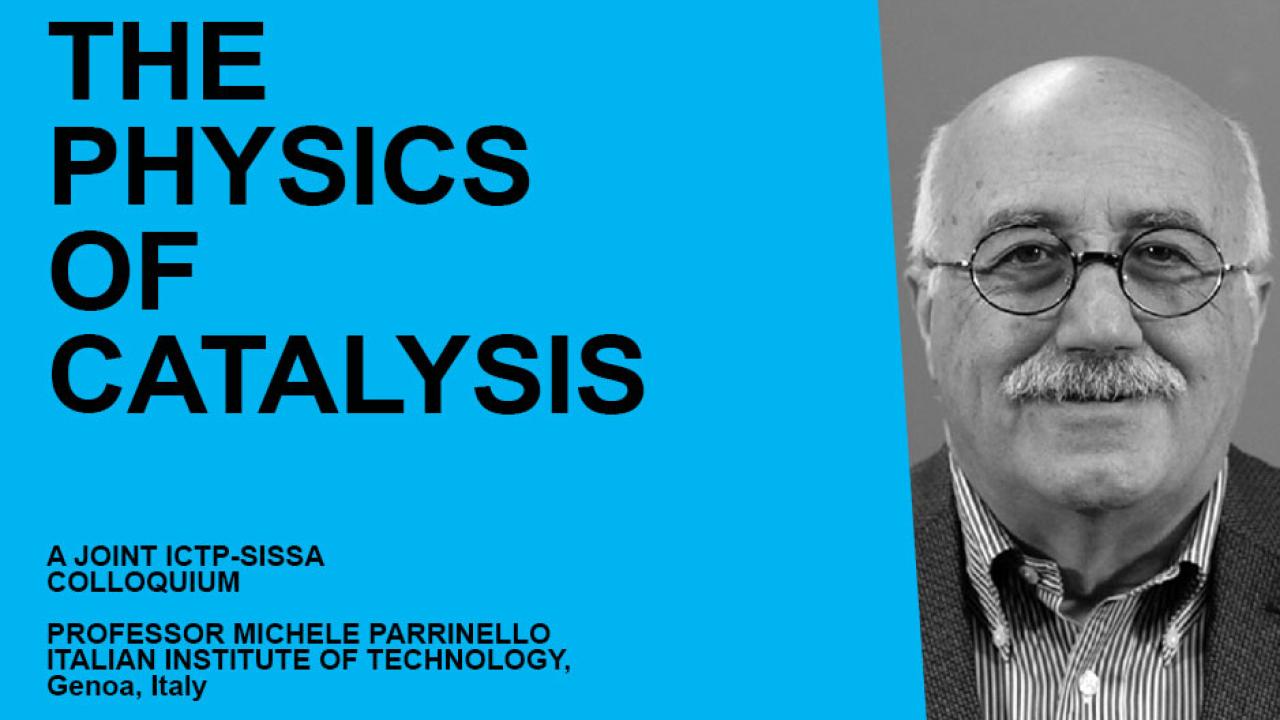 ICTP is pleased to welcome Prof. Michele Parrinello of the Italian Institute of Technology (IIT), Genoa, Italy, for a Joint Colloquium with the Scuola Internazionale Superiore di Studi Avanzati (SISSA). Titled “The Physics of Catalysis,” the colloquium will be held on Monday, 30 January, 2023, at 16:00 CET, in the Budinich Lecture Hall on the ICTP campus.

All are welcome to attend. The talk will also be livestreamed from the ICTP website.

Michele Parrinello has been full Professor of Computational Science at ETH Zurich since July 2001. Until March 2003 he was Director of the Swiss Center for Scientific Computing (CSCS) in Manno and is now with the Italian Institute of Technology (IIT) in Genoa, Italy as Senior Researcher - Principal Investigator: Atomistic Simulations.

Born in Messina, Italy, in 1945, he obtained his degree in physics in 1968 from Bologna, Italy. Prior to joining ETH, he was Director at the Max Planck Institute for Solid State Research in Stuttgart, Germany, and previous positions include research staff member at the IBM Research Laboratory in Zurich, Switzerland, and full professor at SISSA, Trieste, Italy. He is a former Member of ICTP's Scientific Council.

Parrinello's scientific interests are strongly interdisciplinary and include the study of complex chemical reactions, hydrogen-bonded systems, catalysis and materials science. Together with Roberto Car he introduced the ab-initio molecular dynamics method, which he is still developing and applying. This method, which goes under the name of Car-Parrinello method, represents the beginning of a new field and has dramatically influenced the field of electronic structure calculations for solids, liquids and molecules. For his research he has been awarded numerous prizes, including the 2001 Award in Theoretical Chemistry of the American Chemical Society, the 1995 Rahman prize of the American Physical Society and the 1990 Hewlett-Packard Europhysics prize. He is an External Scientific Member of the Max Planck Institute for Solid State Research, a Fellow of the American Physical Society and a Member of the International Academy of Quantum Molecular Science and of the Berlin-Brandenburgische Akademie der Wissenschaften.

ABSTRACT:
The development of efficient catalysts is key to a green economy transition. In this respect, it suffices to mention the need to devise an energy-efficient production of hydrogen or an economical and environment friendly CO_2 sequestration process. However, the large-scale production of chemicals often takes place under extreme conditions of temperature and pressure, so extreme in fact that both simulations and experiment are difficult or impossible.  This challenges the conventional picture of catalysis in which a special static configuration of atoms is responsible for the catalytic activity.  Based on state-of-the-art simulations that take advantage of machine learning methodologies, we put forward a different picture. Namely, we associate the catalytic activity with a change in the physical state of the interface. Such a change can be induced for instance by the temperature or by the reactants themselves. We exemplify this behavior in the catalysis of ammonia by iron surfaces and the cracking of ammonia by the 〖Li〗_2 NH ionic compound. The design of such a catalytic competent interfacial steady state is suggested as a strategy to design new, efficient and stable catalysts.