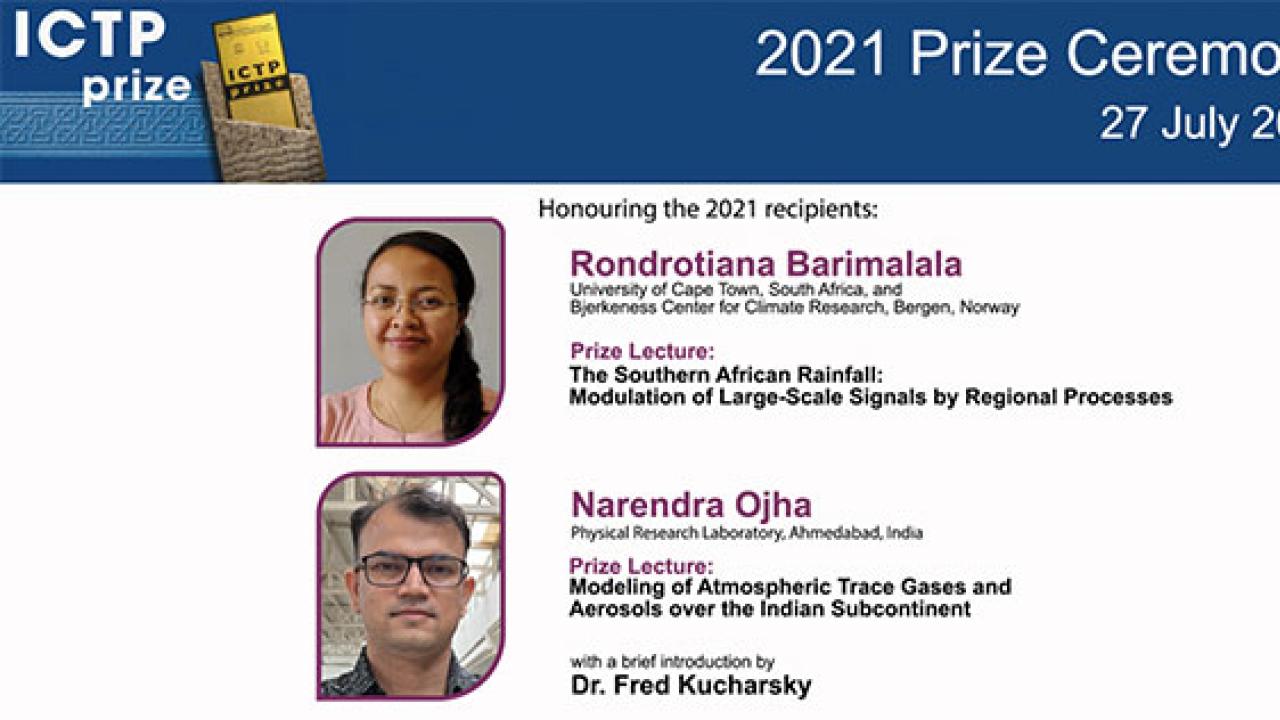 The recipients of the 2021 ICTP Prize will be honoured at a ceremony on Wednesday 27 July 2022 at 15:00  in the Budinich Lecture Hall on the ICTP campus. The event is open to all.

Online attendance is also possible by preregistering at the following link: https://zoom.us/webinar/register/WN_Zn21pCs4T52RMlAJHg-daw

The two recipients of the 2021 ICTP Prize--Rondrotiana Barimalala of the University of Cape Town, South Africa, and the Bjerkeness Center for Climate Research, Norway, and Narendra Ojha of the Physical Research Laboratory, Ahmedabad, India--were cited for their important work on diverse aspects of climate change in Africa and Asia.

The awardees will give lectures on their work at the ceremony. Rondrotiana Barimalala will give a talk on "The Southern African Rainfall: Modulation of Large-Scale Signals by Regional Processes", while Narendra Ojha will lecture on "Modeling of Atmospheric Trace Gases and Aerosols over the Indian Subcontinent". Lecture abstracts are available here.

Much of the work of Rondrotiana Barimalala has focussed on the role of the Indian Ocean on the climate of Madagascar and southern Africa. The ICTP Prize recognizes her pioneering contributions that have advanced the understanding of these interactions through her use of modelling tools and careful data analysis. A deeper understanding of the physical mechanisms driving climate in the region contributes to improved modelling of future climate conditions. This is crucial for Madagascar, a country that is on the brink of experiencing the world's first climate change famine, according to the United Nations World Food Programme. Barimalala has made important contributions to the IPCC Sixth Assessment Report, Working Group 1, which examines the physical basis underpinning past, present and future climate change with policy relevant findings. She is a 2007 graduate of ICTP's Postgraduate Diploma Programme in Earth System Physics.

In India, where ICTP Prize winner Narendra Ojha is based, air pollution is a major health hazard for the country and indeed for all of South Asia. Air pollution also reduces agricultural productivity and therefore adversely impacts the economy of the region. Complex modelling is essential to unravel the roles of diverse emissions in air pollution over South Asia for designing mitigation strategies. It is within this context that Ojha has conducted studies having enormous impact on our understanding of the influence of anthropogenic and biomass-burning emissions on South-East Asian air quality. According to the ICTP Prize citation, Ojha has shown the remarkable role of atmospheric dynamics in governing the distribution of pollution over the Himalayas and Indo-Gangetic Plain, with results of great importance for the region and the world's climate. His work is based on in-situ measurements, satellite data analyses, and chemistry-climate modelling studies over South Asia, contributing substantially to the field of atmospheric chemistry and physics.

The ICTP Prize was created in 1982. It recognizes young scientists from developing countries who work and live in those countries and who have made outstanding and original contributions to physics.

Each year, the ICTP Prize is given in honour of a scientist who has made outstanding contributions to the field in which the prize is given. The 2021 ICTP Prize is dedicated to the memory of Jacob Bjerknes, who discovered the connection between sea surface temperature and easterly winds anomalies in the equatorial Pacific.