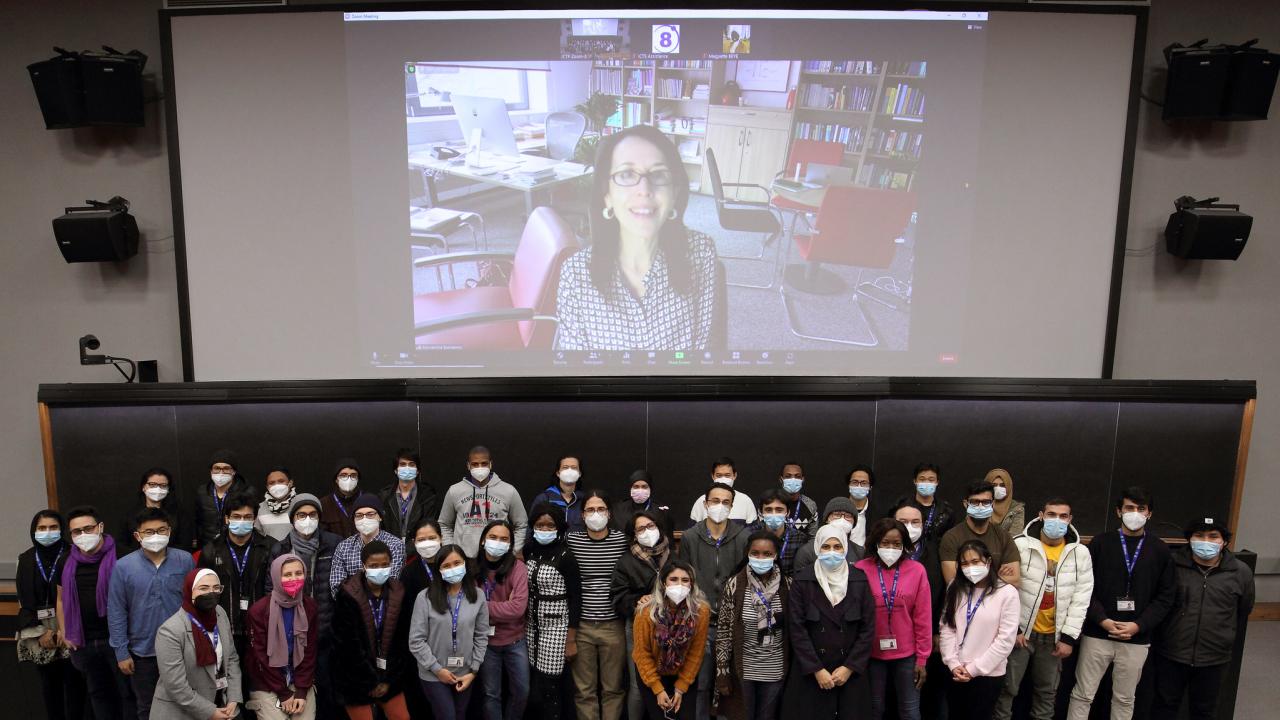 Seven years ago, the excitement at the first detection of gravitational waves made headlines in the physics world and beyond. For theoretical physicist Alessandra Buonanno, the excitement has not dissipated. "Galileo first looked through a telescope four hundred years ago, and this is that moment for gravitational wave astronomy," says Buonanno, Director at the Max Planck Institute for Gravitational Waves in Germany and Professor at the University of Maryland, United States. Recently at ICTP to give the 2022 Salam Distinguished Lecture Series, Buonanno spoke about developments since that first gravitational wave detection, and the future of the field.

"When we first saw the reconstructed signal, it was beautiful. It was very much what we expected from a binary black hole coalescence, like what you would see in a textbook," says Buonanno. Since then, there have been 90 more event detections: "a whole zoo of observations," says Buonanno. Using gravity instead of light to measure and detect astronomical phenomena, some which are too dim or don't emit light at all, is a great way to study black holes, among other objects. The main three categories of events observed using gravitational waves include two black holes merging, two neutron stars merging, and a merger of a black hole and a neutron star.

Each signal from these events comes in as a waveform, but, as Buonanno describes, "the waves are very weak, and they are buried in the noise of the detectors." Buonanno's work focuses on modeling what the fingerprints of a gravitational-wave event would look like. How does the stirring up of gravity from two black holes spiraling towards each other in elliptical, versus circular, orbits appear in the resulting waveform? Using two different theoretical approaches, the analytical an the numerical, Buonanno and her team work to refine templates of what the gravitational signals from different events would look like. With clearer templates, incoming signals can be better understood, separated from noise distortions, and interpreted.

"To interpret the gravitational signals, to understand whether they were emitted by black holes or neutron stars, we have to extract parameters and properties from those signals," says Buonanno. "What was the size, the mass of the black hole? What was the shape of the black hole, the spin? And so these templates are also used to identify the astrophysical source."

The two theoretical approaches Buonanno and her team use to build and refine the templates are numerical relativity and analytical methods. "On the one side, we have numerical relativity, where you solve the Einstein equation on supercomputers. This is the accurate way, but it's very time consuming," explains Buonanno. "So you need also techniques that are faster and a bit approximate, and that is the paper and pencil or analytical method. But then you need to improve these analytical approximations using numerical relativity. There is a synergy between the two methods, and we take advantage of both of them to produce the best templates of gravitational wave signals."

Buonanno is a Principle Investigator of the LIGO Scientific Collaboration, a group of 1200 scientists involved in building, improving, and interpreting data from the two North American sites of the Laser Interferometer Gravitational-Wave Observatory (LIGO). Buonanno and her team work with data from both the LIGO and Virgo Collaborations, another gravitational wave observatory located in Italy. Both of these collaborations make observations in months-long runs, with breaks in between for maintenance and equipment upgrades.

These upgrades mean more and more information can be extracted from clearer waveforms, meaning the amount of information about each of these events is quickly expanding.  Several fascinating open questions have emerged from the gravitational wave detections so far. For instance, there have been several events that appear to involve objects that are too big to be a neutron star and too small to be a black hole, but instead exist in what was thought to be a lower mass-gap. Furthermore, there have been observations of black holes too heavy to form from a collapse of a star, which populate the high mass-gap. The theoretical explanations for what might be happening in these cases is still unclear, says Buonanno, but the upcoming run of the enhanced LIGO and Virgo detectors are projected to detect events at a much higher rate than previously. "With the new run, we'll have many more observations, much more data, and we can look more closely at what is going on with questions like the low and high mass gap, understanding how those black holes pair up in binary systems, and if primordial black holes exist," says Buonanno.

Buonanno is excited not just about the next run of the current detectors, but also about the future of gravitational wave detection experiments. "LISA, to be launched in the 2030's, is a very exciting experiment that will open a new frequency band for the observation of gravitational waves, the millihertz," Buonanno says. With three spacecraft positioned 2.5 millions of kilometers apart, LISA (Laser Interferometer Space Antenna) will be able to detect gravitational waves from black holes millions times more massive than our sun, and with much greater precision.

"There are many exciting open questions right now in gravitational wave astronomy," says Buonanno. "Young scientists interested in this field will have great opportunities to explore the universe."