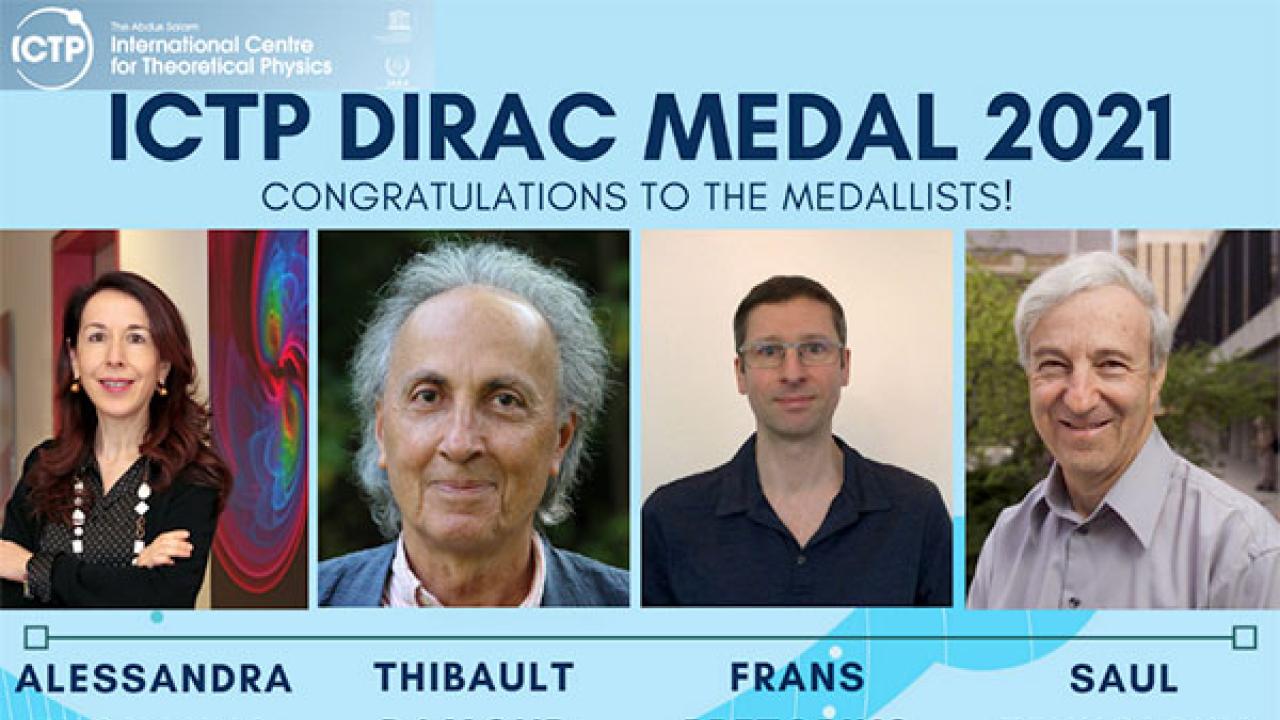 ICTP has awarded its 2021 Dirac Medal and Prize to four physicists whose theoretical work underpinned the 2015 detection of gravitational waves generated by black holes.

The 2021 Dirac Medallists are:

The four physicists have received the medal for establishing the predicted properties of gravitational waves in the curvature of spacetime produced when stars or black holes spiral together and merge. Their work was essential for the detection of gravitational waves from these energetic astronomical events by the Laser Interferometer Gravitational-Wave Observatory (LIGO). Alessandra Buonanno is the second woman to receive the Dirac Medal in its nearly 40-year history.

"The theoretical work of this year's Dirac Medallists was essential for interpreting the observations from LIGO, which is an unusually subtle experiment," explained ICTP Director Atish Dabholkar in announcing the prize. "Together they provide an impressive check of the accuracy of Einstein's General Theory of Relativity. It is a marvelous tribute to the remarkable power of our theoretical understanding of nature, which seemed too outlandish for observational verification until very recently."

Albert Einstein's General Theory of Relativity from more than 100 years ago predicted gravitational waves and black holes. According to the theory, two masses that are circling each other lose energy by producing gravitational waves. It causes the masses to spiral together and eventually merge to a single object, a black hole, if the masses are large enough. The energy released in gravitational waves can be impressively large but the gravitational interaction is so weak that detection and interpretation required very sensitive measurements and reliable knowledge of what to look for. The four Dirac medallists were responsible for resolving the great challenges of performing accurate computations of the predicted waveforms.

Gravitational waves carry information on the motions of objects in the Universe. Their detection opens new avenues of exploration into the history and structure of our Universe. “One thing you can do with the LIGO signals is study possible modifications of gravity, to check whether the signal is compatible with the predictions of general relativity or not,” said ICTP cosmologist Paolo Creminelli, adding that the waves could also be used as tools to explore how black holes are formed or to study the features of neutron stars, opening a whole new view of the Universe much as Galileo's telescopes did.

About the 2021 Dirac Medallists:

ICTP's Dirac Medal, first awarded in 1985, is given in honour of P.A.M. Dirac, one of the greatest physicists of the 20th century and a staunch friend of the Centre. It is awarded annually on Dirac's birthday, 8 August, to scientists who have made significant contributions to theoretical physics. An award ceremony, during which the four winners will present lectures on their work, will take place on a date still to be determined. For more details about the prize and a list of past winners, visit the web page.

Scientific background for this year's prize:

In 1999 Damour and his then postdoc Buonanno invented a formalism for expressing the relativistic orbital motion of a pair of non-spinning black holes in terms of the motion of a particle orbiting a spherical central body, with spacetime curvature fluctuations determined by the mass ratio in a clever way informed by re-summed post-Newtonian expansion of black hole orbits. By solving for the particle’s orbital motion in this deformed metric, Buonanno and Damour found analytic waveforms for the gravitational waves from the inspiraling black holes. They relied on black-hole perturbation theory for the vibrational ringdown, a formalism Teukolsky conceived and developed three decades earlier. The Buonanno-Damour solution proved to be an important first approximation that could be generalized.

But firmer numerical predictions were needed and were sought by Teukolsky's group at Cornell and Kip Thorne's group at Caltech. In 2005 Pretorius, in Thorne's group, overcame the obstacles encountered in the team effort with a code for numerical computation that he wrote largely by himself. He adopted key ideas from David Garfinkle's generalized harmonic formulation of the Einstein equations merged with Carsten Gundlach's constraint-damping method, and he used asymptotically null coordinates that brought spatial infinity into a finite coordinate location, thereby avoiding noise from the outer boundary. Pretorius produced the first accurate numerical simulation of the complete waveform produced by a pair of black holes as they spiral together and merge.

Pretorius's demonstration assumed the two black holes have the same mass and are not spinning.  The LIGO experiment required the signals it might encounter from mergers of black holes with different masses, spins, and spin directions. Teukolsky, Buonanno, and Pretorious led the way with their colleagues to the needed accurate and rapid computation of predicted waveforms by combining the methods that the four Dirac Medalists had pioneered.

Buonanno, who had joined the LIGO Scientific Collaboration, took part in the application of the theory to the convincing detection of gravitational waves from merging massive objects. This is the first test of Einstein's general theory of relativity applied to strongly nonlinear fluctuating spacetime curvature.