How Best to Live with Climate Change 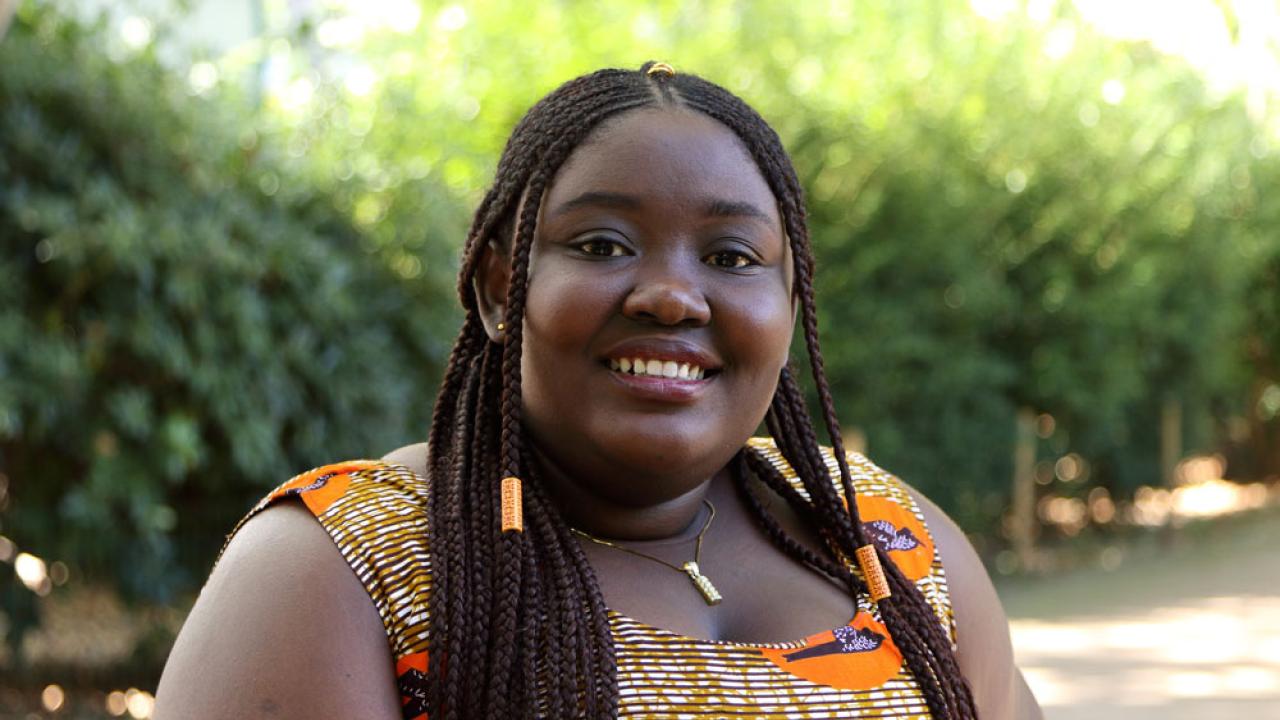 The climate crisis is affecting every part of the planet, but some places are being hit harder and faster than others. “West Africa is particularly vulnerable to climate change, because of its high dependency on climate-related activities in most of its socio-economic sectors and its low adaptive capacity,” says recent ICTP Diploma graduate Olivia Vashti Ayim. “The agriculture, fishing, transportation, and health sectors are all being highly affected by climate change.” That’s one of the reasons Ayim became a climate scientist, arriving at ICTP from Ghana to study atmospheric science.

“I’m working on finding an efficient way to predict the beginnings of the monsoon season in West Africa,” says Ayim, speaking of her final Diploma project. Ayim’s work focused on examining the nature of the moisture budget in the West African Monsoon and detecting transitions that mark the monsoon onset and cessation. The arid regions of the Sahara and the Sahel depend on the West African Monsoon for a large majority of the total precipitation they receive each year, and predicting the start of the monsoon is key for planning water usage and day-to-day activities.

With climate change increasing temperatures, there are likely to be more frequent and intense droughts, storms, and heat waves which threaten the livelihoods of the people in the region. “More atmospheric and oceanic research must be done to understand the many factors affecting the climate,” says Ayim, “as well as possible ways to either mitigate or adapt to it.”

The monsoon is one of the major large global weather patterns that affect West Africa. Sitting at this intersection, Ghana’s climate is expected to become very variable as the planet warms. With the country’s power grid relying heavily on hydropower and its economy based largely on climate-sensitive industries like agriculture, fishing, and forestry, extremely variable rainfall, increasing salinity, and rising seas will have a considerable impact on the country. In addition, the yields of commonly grown cereal crops like maize and fish population health are both forecasted to decline.

At the same time, Ghana is one of the few countries in the region investing more than one percent of its gross domestic product (GDP) in higher education. In addition, Ghana has joined the Global Pilot Programme on Science and Technology Investment for Sustainable Development Goals roadmaps, working with several United Nations agencies, including ICTP’s parent organization, UNESCO. The programme aims to support and accelerate progress to use new and existing tools  for sustainable development in the country.

Now, at the start of her research career, Ayim’s research interest is understanding mesoscale and convection dynamics especially in the tropics, gaining knowledge to help her country, region, and the planet understand and live with climate change. She will get a chance to develop and expand her research during her next adventure, joining the second year of a joint Master’s degree programme at the Università L'Aquila and the Università di Roma “La Sapienza,” with support from ICTP. “One of the great parts of the ICTP Diploma Programme was how it’s really broad, so I could pick out my research interests as I go.” For her Bachelors degree, she studied meteorology and climate science at Kwame Nkrumah University of Science and Technology (KNUST) in Kumasi, Ghana, in the Physics Department there before coming to ICTP. One of her professors, Leonard K. Amekudzi, who is an ICTP Fellow, told her about the Diploma Programme, encouraging her to apply, knowing she was interested in continuing her studies in climate science.

Ayim has been one of the youngest people in her class ever since she can remember, and graduated from ICTP’s Diploma Programme at 22 years old. “My father is an educationist and educator, he had me in school when I was nine months old,” she laughs. “My parents really supported and encouraged me, and I really enjoyed science classes as I was growing up. And I was always curious about the science behind indigenous knowledge,” says Ayim. “It was a big deal for me to get this opportunity to continue studying climate science at ICTP.”

That opportunity brought her to ICTP for an unexpectedly bumpy year, with a global pandemic rapidly shifting the dynamics of the Diploma Programme at ICTP. “Dealing with Covid was difficult at first, for me classes are more effective in person. But the professors did a great job moving to working online and remotely,” says Ayim. “Coming to Italy was my first time traveling outside of Ghana,” says Ayim, “I was really excited. And I’ve met some really cool friends as part of this Programme, people from all over the world all excited about science.”

Ayim’s favorite course during ICTP’s Diploma Programme was Physics of the Atmosphere and Thermodynamics. “I studied it before, but there were many more details in this course and I understood a lot more than I did in university,” says Ayim. She did her Diploma thesis work with Simona Bordoni of the University of Trento, Italy, and ICTP climate scientist Adrian Tompkins, and really enjoyed working with him. “He has a real passion for what he does,” says Ayim.

“All of my professors at ICTP are seasoned lecturers. They know you’re coming from a developing country and don’t care, they’re always ready to help,” says Ayim. “I would recommend this programme to any young researcher. It’s intense but the courses are really interesting and the environment is great.”

Ayim hopes to inspire and motivate young people to go into science and especially climate science as her career progresses. “I definitely want to become a lecturer and a scientist, to share the knowledge I have gained and train young scientists to research how best to live with climate change,” says Ayim. “Especially young women, it’s really important that girls know they are needed and welcome in science, particularly climate science.”